What happens once I have been nominated?

Once a nomination has been received, you are then asked to formally accept or reject the nomination. You will then be asked to a manifesto. Once all the manifestos have been received, they will be issued to the Regions/Centres for their review, consideration and action. It is then your responsibility to actively organise and carry out your election campaign (at your own cost) to all members and affiliates, this will be via the Communications Department and direct liaison with Regional and Centre Committees. Your campaign can be by a variety of mediums which is for you to choose. We provide you with the contact details of the Region/Centre Committees.

You will need to prepare a full manifesto for publication and distribution via the Institute’s media channels; details of what we would be looking for in the manifesto will be included in the election section of the website and information pack. It will also be featured in the spring issue of AT Journal.

We will provide further clarification on the election process and the information we would be seeking on the website.

Over the election process, and the lead up to the elections in September, we will be issuing some election special ealerts providing reminders and updates together with profiles of the candidates standing for the positions etc.

If I stand how do I promote my candidacy?

There are a number of ways in which you can put yourself in front of the members and affiliates during your election campaign.

There is the traditional manifesto which will outline your policies, thoughts and aspirations for both the role you are nominated for and the Institute. This should not be a CV but a formal written document which grasps your key objectives and aims. Alongside this, you can create a profile which showcases you as a person, captures your personality and strengths and puts across the real you to people who do not know you and want to know more about the person seeking election.

In this technological and social media focused world, you can create Twitter or Facebook accounts, videos, podcasts, blogs or a series of short films which support your manifesto and profile. You can get your message across simply and they can all be easily accessed.

You could arrange for a Q&A with members and affiliates at a location and venue that is accessible and could have visits to Regions and Centres and meet with Council, those who will be voting on the day. There are a number of different mechanisms which will be covered in the information pack.

What is the voting procedure?

How is the vote taken?

Elections are held at the autumn Council meeting: 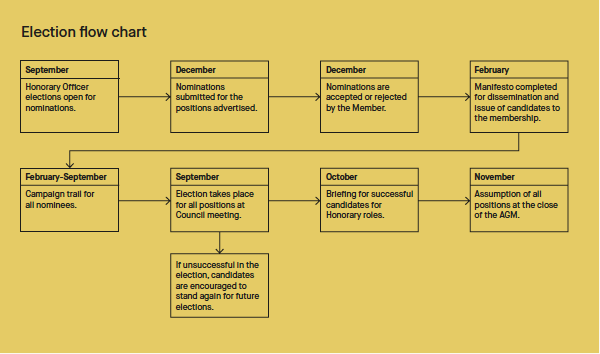