Where do Standards (and standards) fit in the hierarchy of compliance imperatives?

The theory is quite simple, but the practice sometimes throws up questions – when in doubt the theory rules...or should.

At the top of the hierarchy is the law set out in legislation and legislative instruments. In England, for example, this is primarily the Building Act, interpreted in the Building Regulations and while each of the devolved nations in the UK and in countries around the world have their own Building Acts and Building Regulations, they are all primarily concerned with regulating the product (a completed building or other structure) in terms of its parameters regarding health and safety and use of energy (which is ultimately also about H&S as it is about saving a planet to live on).

In some ways a secondary issue for us, not in importance but in the impact on our day to day work, is the process with the likes of H&S in the workplace legislation and specifically for construction, the CDM regulations. Process is not enlarged on here.

Finally, any construction project is a commercial relationship involving binding contracts between various parties. While (theoretically?) not allowed to contradict either of the above they can have requirements and conditions that, for example, require a higher standard. Some of these may relate to enhanced levels of performance – BREEAM (when a contractual requirement) is an example of this as to achieve a higher rating will require going well beyond statutory parameters in a number of characteristics.

Some may relate to qualifying for particular insurances for the completed facility and some to either general or product guarantees. There are also those related to specific products or systems that offer apparent enhancements when considered in isolation but can create conflicts with legislation when incorporated into the wider context of a construction. Beware blanket commercial claims of "Complies with Building Regulations" as very often there would be caveats depending on the precise circumstances of use.

Product
Whilst acknowledging that each of the devolved countries within the UK have their own regulatory framework, for simplicity we shall use the English Approved Documents for reference.

As we know, the Approved Documents are not "regulations". However even when we know this it is tempting to treat them as if they are regulations. We also know they are but a way to comply and are best suited for orthodox buildings. Take as an example the first Regulation: A1/2, Structure – Loading and Ground Movement. The requirement (the regulation bit) is less than 200 words pretty much saying "make it stable and safe". The approved document (we used to have the more descriptive term "deemed-to-satisfy") makes viable 'how to' provisions and runs to a further 50 or so pages citing around 80 other documents – mostly Standards of which many are of even greater length. 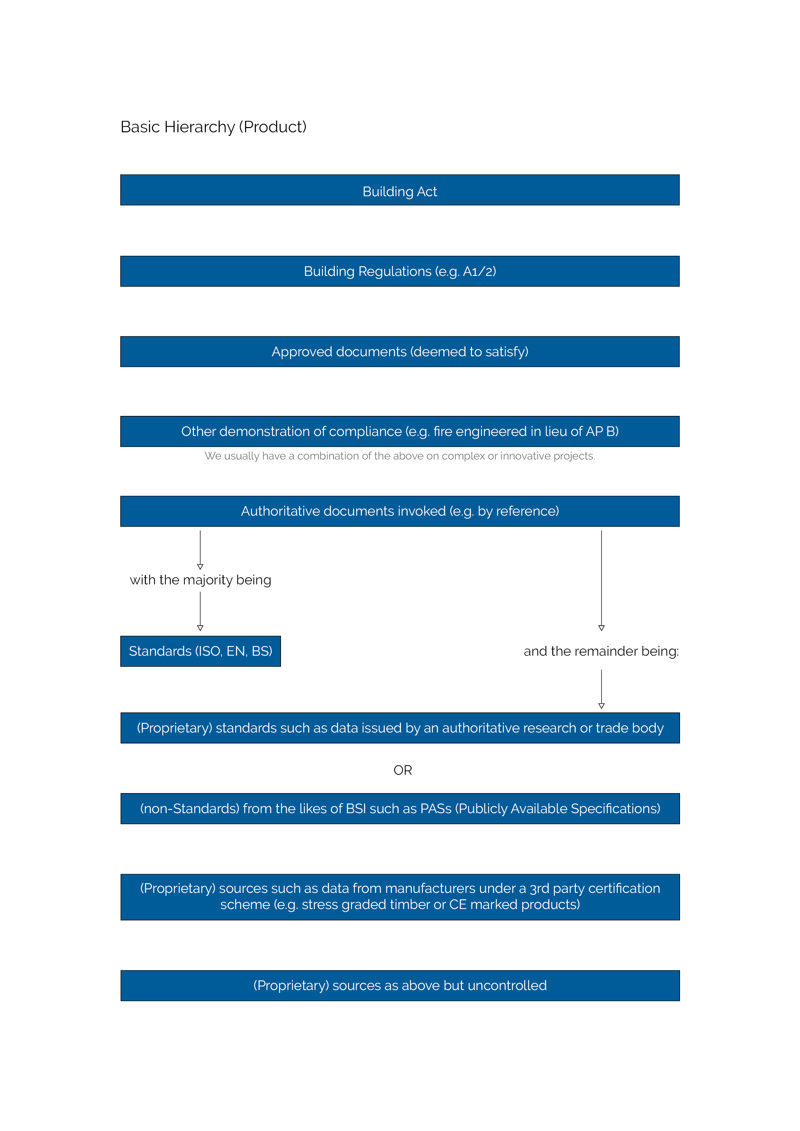 There are other kinds of references such as documents issued by insurance companies with particular requirements – these have very high commercial imperatives (i.e. perhaps conditional for letting buildings) but lower statutory imperatives. Beware conflicts and though your commercial obligations perhaps have a louder voice, the theory still rules. Also, authors of 'authoritative documents' (4b) that are not Standards often vie for superiority, for example by affinity to publishers of documents higher up in the table, but in the formal hierarchy they occupy the same level – or should. Some such as BS PAS documents are prepared specifically to be cited in other controlling systems that are often contractual. The most visible occurance of this over recent years has been the series of BIM PAS's, thankfully now replaced by full ISO documents. It is not the fact that the document emanates from our national Standards body that, per se endows the authority but the manner in which it is cited. Without such citation a PAS fits in its place above (4b) in the hierarchy.