The 22-year-old who studies on the CIAT Accredited programme BSc (Hons) Architectural Technology at London South Bank University took on rivals from across the UK at the final in Middlesbrough where he had to model a building and collaborate data using Autodesk software.

Daniel said: “I watched the medal ceremony at work with my colleagues, it was great to see my name announced. Although very nerve wracking when I wasn’t called out for bronze or silver it was all or nothing for gold and luckily, I came through with the win. I’m really excited to see what opportunities WorldSkills has opened for me, hopefully more competitions to come!

“It’s amazing to get this reward after investing so much time and effort. However, it wasn’t all me. I’m very thankful for the support of my company GDM Architects. Especially my director Kevin Matthews, who has always been so supportive of my journey even from the very start when winning gold was just a dream. Now I’m glad to say it’s very much a reality and I’m so grateful for all those who supported me.”

Daniel now has the possibility of competing at the “international skills olympics” in France in 2024. The Team UK squad for the prestigious international tournament will be announced early next year.

As part of the Worldskills UK Digital Construction competition, students work on a BIM project information model, produce structural and architectural models, coordinate and manage the project information according to the ISO 19650 Standards series, and finally apply costs and digital site execution Workflows.

Over the past 5 years, the WorldSkills UK Digital Construction competition has grown to include students from over 15 education institutions, spread all over the UK and 22 countries from around the world. 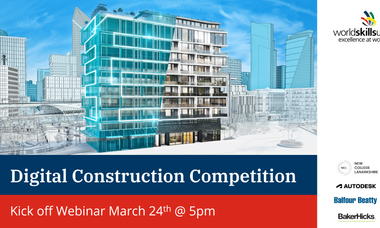 Dragons' Den competition for young professionals in the construction industry