A group of MPs has blasted the government for "badly missing' a target to replace combustible aluminium composite material (ACM) cladding on most high-rise residential buildings by June 2020.

And it warned that there was "no convincing plan" for how the government planned to meet a new deadline for works on high-rise blocks to be completed by the end of 2021.

Three years after the Grenfell Tower disaster, in which 72 people died, around 155 out of 455 high-rise buildings with Grenfell-style cladding have had it replaced with a safe alternative, the Public Accounts Committee said.

In a report published today (16 September), it said it was "imperative" that the new deadline for works be met.

It added that the British system of building safety regulation has not been fit for purpose for "many years" and these failings "have left a legacy of problems" for the Ministry of Housing Communities and Local Government (MHCLG).

The report warned that a lack of skills, capacity, and access to insurance is "hampering efforts to improve or simply assure the structural safety of apartment blocks". This, it said, affected the confidence of buyers and mortgage lenders in sales of flats across the country.

And it expressed concern that the £1bn made available by the government in March 2020 to fund the replacement of other forms of dangerous cladding on high-rise buildings would meet only around a third of the total costs.

Chair of the Public Accounts Committee, Labour MP Meg Hillier, said: "The department set its own target to remove cladding and yet has failed to achieve even a third of the work it set out to deliver. Thousands of people have been condemned to lives of stress and fear in unsaleable homes with life-changing bills; for the works and for the fire-watch that is necessary to allow them to sleep at night until it's done.

"The government has repeatedly made what turn out to be pie-in-the-sky promises – and then failed to plan, resource, or deliver. The deadly legacy of a shoddy buildings regulation system has been devastating for the victims and survivors of Grenfell but is leaving a long tail of misery and uncertainty for those whose lives are in limbo.

"The government must step up and show that it will put a stop to the bickering over who is responsible, who's going to pay for the remediation – and just put this right." 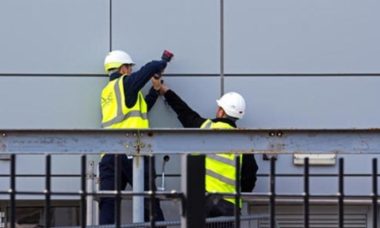 90% of cladding remediation complete or underway