A £50 million flood alleviation scheme in Leeds which uses moveable weir technology – a first for flood risk reduction in the UK – opened this week.

The first phase of the award-winning Leeds Flood Alleviation Scheme not only uses state-of-the-art flood defence engineering techniques but is one of the largest river flood alleviation schemes in the country.

Led by Leeds City Council in partnership with the Environment Agency, the scheme will provide more than 3,000 homes, 500 businesses and 300 acres of development land with increased protection against flooding from the River Aire and Hol Beck.

According to government figures, more than 22,000 jobs will be safeguarded over the next 10 years due to the increased level of protection and through the scheme’s development and construction, 150 jobs and apprenticeships have been created.

It comprises three main elements: state-of-the-art mechanical weirs, the merging of the river and canal and flood walls and embankments stretching 4.5km through the city centre.

The scheme, which sees work on the River Aire now substantially complete and work at Holbeck continuing into autumn, is being officially opened by the Leader of the Council, Councillor Judith Blake CBE and Chair of the Environment Agency, Emma Howard Boyd.

Multiple funding streams have contributed towards the cost of this £50 million scheme, including £35 million of government Grant in Aid funding alongside £10 million of local funding from Leeds City Council and partnership funding from Leeds City Region Enterprise Partnership and others. The government is spending £2.5 billion to protect a further 300,000 homes by 2021.

Leader of Leeds City Council Judith Blake CBE said: 'We are delighted to see this much-needed first phase of the Leeds Flood Alleviation Scheme opened. As could be seen by the devastation at Christmas 2015, providing increased flood protection in Leeds is essential in terms of reassuring our residents and businesses, and this fantastic state-of-the-art scheme provides it for the city centre and downstream at Woodlesford. The clever use of the mechanical weirs is a brilliant idea, and they have also brought about environmental benefits with the improved river quality bringing salmon and otters, while the new bridge looks stunning offering great views of the river and beyond as part of the Trans Pennine Trail.

'We’d like to thank everyone involved in this phase of the scheme and look forward to developing the plans for phase two and beyond, as only through an entire catchment and citywide approach can we protect all communities in Leeds from the threat of flooding.' 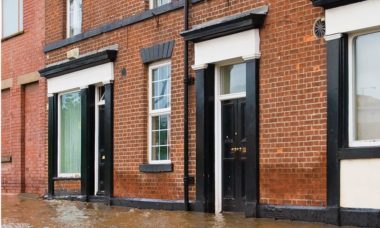