The world's first building made from "carbon concrete", which is reinforced using carbon fibre instead of steel, is under construction in Dresden, Germany.

The building has been designed by German designer Henn alongside the Technical University of Dresden.

Its designers claim that using carbon fibre reinforcement instead of steel cuts the embodied carbon of a structure by half, owing to the smaller quantities required.

The carbon fibre is used as a matrix that a mixture of concrete and polymers is poured into. According to Henn, this delivers concrete that is four times lighter and four times stronger than normal, allowing thinner and more flexible designs. And because it does not contain steel rebar, it is immune to corrosion.

The carbon concrete composite Cube, which has a floor area of 220 sq m, will act as a meeting and exhibition centre.

Financed by the Federal Ministry of Education and Research and built in south Dresden's Fritz-Foerster-Platz, it is a showcase project of the "C³ – Carbon Concrete Composite" research initiative.

The design of the Cube nods to the possibilities of C-cubed, as the material is known. Henn says the merging of roof and wall suggests "a future architecture where environmentally conscious design is paried with formal freedom and radical rethinking of the most basic architectural elements."

The Allplan website notes that one possible use for the material is bridges. It says that most of Germany's 200,000 bridges require restoration since their average life span is around 40 to 50 years. "Bridges made of textile-reinforced concrete...will be able to last for approximately 80 years without any large-scale renovations."

It adds that carbon concrete is around 20 times more expensive than conventional concrete, but that disparity is reduced because less material is needed and the durability of the material means that its lifetime cost is reduced. Cost savings will also be made in the future as the techniques for adding carbon fibre to concrete are refined. 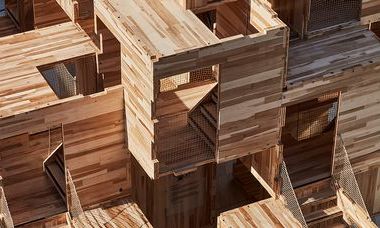 Are your doormats flame-retardant?